ABB Installation Products Inc., formerly Thomas & Betts, is expanding its relationship with Schaeffer Marketing Group (SMG), a leading electrical manufacturer representative in the United States. SMG will now represent all ABB Installation Products in Eastern Missouri and Southern Illinois, in addition to existing programs across middle Illinois and the Carlon® line of electrical branded solutions they already represent in this market.

Electrical customers across these areas can work with SMG as a local resource for sales, service and support of the ABB Installation Products portfolio. This includes Ocal® conduit and fittings, the Color-Keyed® compression system line, and a wide range of electrical components and materials for commercial and industrial applications.

“Growing our program with Schaeffer Marketing Group helps electrical contractors and installers who rely on our solutions every day to deliver on critical construction, industrial and residential projects,” said Deni Miller, SVP of US Sales for ABB Installation Products. “Customers and distribution partners across Illinois and Eastern Missouri now have greater access to local support and supplies to meet a broad range of electrical needs.”

We here at Schaeffer Marketing Group are excited to engage with our market for the full Thomas & Betts line and look forward to serving our customers on a broader range of products needed on every job.

SAINT LOUIS, Mo. – Schaeffer Marketing Group has announced that the co-founder, Michael “Mike” Schaeffer, will be retiring at the end of 2021, after over forty-five years of service, and his daughter, Kris Steiger, will succeed him. With over twenty years of experience in the industry, Steiger has managed the company as President and principal owner in recent years.

Steiger stated, “My dad put his blood, sweat and tears into building this company, earning a reputation in this industry of which we all can be proud. His tireless efforts to serve our customers, to promote our manufacturers and to support our team have inspired me through the years. Together, my parents built this company on a foundation of integrity and a strong work ethic.”

Schaeffer started his electrical career in 1965 as an electrician’s helper at Sachs Electric. He graduated from Missouri University of Science and Technology with a BS in Engineering Management in 1970. While working for Southwestern Bell as a plant engineer, he earned a Professional Engineer license and an MBA from Washington University. Schaeffer cofounded the rep agency Schaeffer Sales Inc. in 1976. Notably, the agency still represents those original manufacturers: Carlon, now part of ABB/Thomas & Betts, and Prime Conduit.

With his wife Brenda, Schaeffer reorganized the agency in 1997 as Schaeffer Marketing Group, Inc., with both performing outside sales and management. In 2014, the agency merged with Ajax Electrical Sales and merged with LEC Co. in April of 2021.  The agency has grown to become a full-line hybrid specification supply and lighting agency.

Mike and Brenda will serve on the board of Schaeffer Marketing Group while traveling to see grandkids and family. Mike plans to stay active with the Electrical Board of Missouri and Illinois.

Schaeffer Marketing Group is proud to announce a new team member covering central IL. We are pleased and honored to expand the service we offer to our market and our manufacturers.

Chris Gaff, outside sales, will cover central IL and has experience in electrical distribution and in lighting in that market. Chris lives and works in central IL for quick response and great service in the area. With experience with electrical and lighting products, in selling to contractors, institutions and end users, Chris is ready to assist our customers now. His email address is [email protected] and his cell phone number is 314-532-4402. Please reach out to Chris if he can assist you in any way.

Please call me to discuss if you have any questions or concerns.

To our valued manufacturer and customer partners,

Schaeffer Marketing Group is excited to announce that Bruce Eason, Don Calcaterra, Tyler Kisro, and Ellen Eason of LEC & Co. have joined our team. They bring over 125 years of lighting experience along with some of the lighting industry’s finest manufacturers that will enhance SMG’s already great portfolio of top-notch lighting, controls and electrical companies. Please see attached to view the new team lineup and linecards.

Bruce and Don will cover some distributor, contractor and specifier accounts while Tyler focuses on specifiers. Ellen offers lighting design services as well as covers inside sales for some electrical lines. All who join the existing Schaeffer Marketing Group team have great experience in the specifier, design build and energy retrofit markets but will greatly define our lighting focus in the specifier market. Lighting services provided include project design, photometric layouts, utility incentive calculations, payback analysis, and job management.

Schaeffer Marketing Group, Inc. is an electrical and lighting manufacturer’s representative firm originally established in 1976. The Schaeffer Marketing Group team is pleased to represent quality manufacturers and their products in eastern Missouri and southern Illinois, with many manufacturers represented in central Illinois as well. We offer our partners product expertise, longstanding relationships in the market and unequaled customer service with honesty and integrity.

We look forward to collaborating with you on your next project – whether it be an electrical or a lighting solution you need. Thank you for your support.

Of course, 2020 was an unprecedented year for our country and the world.  It’s safe to say that all of you are looking forward to a safer, happier and productive year ahead.  2021 marks a special milestone for Picoma, as we will be celebrating our 75th anniversary in business.  We have been manufacturing Picoma products 100% made in the U.S.A. for 75 years.  We are very proud of our past but even more excited about our future!  Our commitment to our employees, our customers, and our industry is to make the very best products from American-Made steel.  This mantra has been engrained in our culture since 1946.  Picoma continues to invest in our plant with state of the art equipment coupled with the best team in the industry to keep us looking forward to the next 75 years.

We hope that you will join us in this celebration by following us on our social media platforms.  Please Like, Retweet or Share your experiences with the Picoma brand and products, we want to hear from you.

Thank you for your partnership and continued support of Picoma!

Schaeffer Marketing Group is proud to announce that we will represent Encore Wire in the Eastern MO and Central/Southern IL territories effective next month, 9/1/2020.

Encore Wire is a leading US manufacturer of copper and aluminum electrical building wire known for service and quality second to none, which aligns with our reputation and values. Encore delivers products and productivity enhancing solutions to reduce overall job costs.

Our team is very excited to partner with Encore, to exceed our customers’ expectations and to deliver products that benefit the channel. We will make all necessary adjustments to the staff and operations to continue offering our customer partners the same level of customer service on all of our manufacturers’ lines.

At the 2020 Annual Ameren MO Trade Ally Awards Banque held in March of 2020, Schaeffer Marketing Group received the award for Most Outstanding Lighting Rep Agency.  We are so proud to improve the bottom line of end users in our community and save on our global carbon footprint. If you would like to find out how we can upgrade your lighting, save on maintenance and save energy costs – please call today. 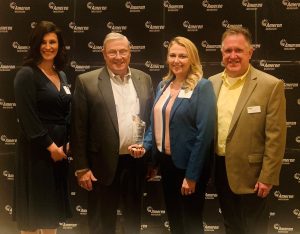 Schaeffer Marketing Group welcomes Scott Obert to our outside sales team.  Scott joined in June of 2019 and is currently training on the inside.   We will be assigning a sales territory after his training period is completed. 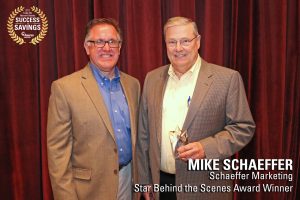 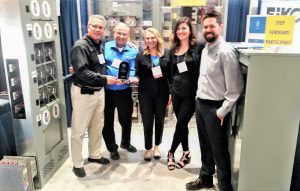 At the 2019 Annual Ameren MO Trade Ally Awards Banquet, Schaeffer Marketing Group received the award for Most Outstanding Lighting Rep Agency.  The award was for saving Ameren Missouri customers 6,368,963 kilowatt-hours and providing $477,850 in incentives. It is a true honor. We continue our work to save our customers energy costs and to provide better, more efficient lighting. Check out our Lighting Solutions page for more information on how we can help do this for you or your customer.

At the NEMRA Conference in February of 2011, Inside Salesperson Jamie Radin was named the Inside Salesperson of the Year for Universal Lighting Technologies. Jamie received this honor because of her commitment to accuracy, excellent customer service, and thorough with factory personnel. She has learned both operational and technical sides of this line and offers our customers accurate, timely responses.

In addition, Mike Schaeffer was named ULT’s Rep. Outside Salesperson of the Year award for his efforts in the energy retrofit market and for outstanding growth in ULT sales. Congrats, Mike and Jamie!

Schaeffer Marketing Group continues our work in the energy efficiency field, which began about 20 years ago when we began representing ULT (then Magnetek). Check out our Energy Efficiency page to see how we can help you in this market.

Schaeffer Marketing has the one of the best inside teams out there! They are always quick to respond and take care of whatever I need.

From a Satisfied Customer

View our full current linecard with inside sales specialist notations

View our Central IL only linecard